Why am I Doing This? 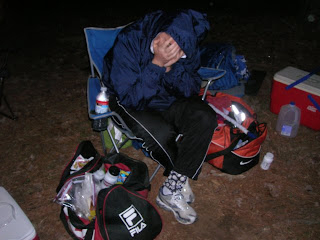 Well this time next Sunday the 2008 Umstead 100 miler will be officially over. I will either be celebrating an accomplishment or disgusted with another DNF.

The nervousness has set in big time. Last night I repeatedly dreamt about the race. I must have woken a dozen times and looked at the clock and speculated about where I would be on the course at that time next week. I cant wait for this to be over.

In 168 hours, I will be on my 5th loop at Umstead with my faithful pacer as my guide. A little over 12 more to go hours and I will be thanking my pacer, crew and race volunteers as I collecting my finisher’s belt buckle.

I will be feeling good and as light as a feather. My feet will be blister free and my toenails will be clear and pink. My stomach will be calm and full. I will be looking forward to my next bottle of Perpetuem.

Obviously, tapering has made me delirious!

I am as ready as I can be. I spent last night packing my drop bag full of nutrition product, meds, three pairs of shoes, a few changes of clothing, headlamps and every type of tape known to ultra running (duct tape included)! The only thing that is missing is a small caliber handgun so my crew can put me out of my misery. Of course I have packed a bottle of good Scotch to celebrate my victory or at least drown my sorrows if I fail to finish.

I must have 50 pounds of crap for my poor crew to handle. Thankfully, they are able to set up a base camp and tend to me every 12.5 miles. The one thing I have come to appreciate most in my preparation for this race is the commitment of my friends to do whatever they can to help me meet this goal. I must have done something right in a past life to deserve friends like this. They live the snail motto – We are behind you all the way!

In appreciation for all their support, I ordered some shirts for my crew and fellow Snails who will be running Umstead. The folks at Customink www.customink.com did a real nice job and their customer service was superb.

If any readers see us at the race, please say hi.

I am now in the taper mode. My workouts are limited to light weight workouts and stretching. The real pain comes from all the eating I am doing out of boredom. The office junk food stockpile is a dangerous temptation. I am taking Glucosamine and Race Caps twice a day in preparation for the run. I am also drinking a yogurt and Hammer Soy smoothie twice a day. Coffee has joined booze on my no no list until the race.

I have been practicing my foot taping over the last week. I am taping in the evening and wearing the tape for the next day.

Words of encouragement are coming in from my fellow Snails. God, I wish this thing was over! Someone get me a drink!

Running is not a Crime!

Today while running at Lock Raven we were confronted by a belligerent member of the Baltimore County Police Department.

It appears that running has become a crime. “There has been a lot of complaints about “yous” runners and bikers from people in the neighborhood.” Are you part of a running club? “Who is in charge – I want his name” – as he pulls out the official police notebook. Stay off to the side of the road – this is your only warning!

Now as I recall, Maryland law states that bike is a vehicle entitled to the full use of a lane and any self preserving runner is not going to risk an encounter with a speeding motor vehicle. Hey Baltimore County Police! Why not earn your keep and control the speeders?

It appears that some of the local citizenry of Baltimore County don’t like the ideal of sharing a road in a public park with the criminal element that are know to get up at 7 a.m. on a Saturday morning and run 20 miles.

You know the type we are talking about -- lycra clad, middle aged, over achieving tax payers.

Chief Wiggums would be proud of the Baltimore County Police!

I have started to taper off on my runs. I have done 7 miles three times this week followed by a bit of chest and arms strength training. I am having a bit of a problem with my right knee. I think it is time to give it a rest.

All considered I feel pretty good about my upcoming attempt at Umstead. The physical preparation is done. I got all my Hammer product, meds and race gear. I even have a suture kit just in case things get real ugly.

I know that the volunteers and aid station crews at Umstead are known for their hospitality and ability to make you feel welcome like a relative. Of course unlike a relative they won’t hesitate to tell you when you have stayed to long and it is time to hit the road. Thanks in advance for all your hard work!

I am blessed to have an experience ultra runner, coach and friend who has volunteered to be my crew and pacer for this run. I know that he and the rest of my snail friends will do whatever is necessary to help me through 30 hours of fun in the North Carolina woods.

Now it is time to get mentally set. This year, I am going to finish this dam race even if the bone is showing!

It has been a good training week as I begin my taper for the Umstead 100 mile run. Today I did a 13 miler on the NCR Trail in my new Zoot running shoes and Injinji sock liners. I found the Zoot lacked a bit of in the way of arch support so I need to go with an insert to gain more support.

After the run I met up with some fellow snails for breakfast at Bagel Works. I needed a junk food fix so I went with the Pizza Bagel and some chips on the side. Feeling that I needed to pay for my sin, I went to FX after breakfast and did a bit of a weight workout.

The weather is perfect; I am spending the afternoon doing some yard work.

On the nutrition front at the recommendation of one of the trainers at Fx, I started a new supplement MonaVie. I don’t know if it is worth the investment but I will give it a month or so to see if it works.

26 days to Umstead! I am starting to get buyer’s remorse.

Why am I doing this?

Have I trained properly?

Do I have what it takes to run for 30 hours?

Maybe this guy has something –

What happened to faking a cough? Sheriff's detectives in Franklin County said a man had his friend shoot him in the shoulder so he wouldn't have to go to work.

When he first spoke with deputies, Daniel Kuch, of Pasco, told them he'd been the victim of a drive-by shooting while he was out jogging Thursday. But detectives told KONA radio that Kuch later acknowledged that he asked his friend to shoot him so he could get some time off work and avoid an upcoming drug test.

The friend, Kurtis Johnson, of Burbank, has been arrested for investigation of reckless endangerment. Kuch was booked into the county jail and is expected to be charged with false reporting.

Detectives declined to say where Kuch works, or whether he still has a job. It wasn't known if he had obtained a lawyer.

Oh well, I can’t stand the sight of blood, so I guess I am not going to get out of Umstead that easy.

My training is going well. I continue to run 10-15 miles every morning before work and do a gym workout every evening. I have started to back off on the weights a bit, next week I will start to taper my running mileage.

Friday was the last of my long runs. I ran 15 miles before work and another 14 mile cold, dark and wet run in the evening. I was joined on my evening run by Ma Snail and Sunny who made the experience down right fun! We ran, talked, and walk through 14 miles of rain. This was follower by a late dinner at a local diner.

We ran through every kind of rain there is. “Little bitty stingin' rain... and big ol' fat rain. Rain that flew in sideways. And sometimes rain even seemed to come straight up from underneath.”

My pre season purchases arrived this week. I have come to realize that triathletes are way ahead of runners on the techno geek scale. Of course I should have realized this from my past life as a Triathlete. I am the proud owner of on of the original triathlon bikes a Kestrel 4000 full rigged with Dura Ace components, HED disk and the old Scott DH handle bars!

Thanks to my rebirth and rediscover of the triathlon spirit (read in here that I am soon going to announce my intention to do something totally insane) I am much poorer this month. My new toys include:

And the piece de resistance

I also started to use a somewhat unusual drink Hornet Juice!

Someone please rescue me from myself. 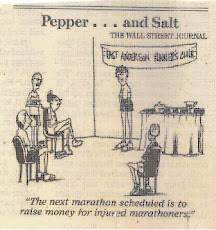 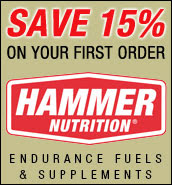